The Russian Anastasia Pavlyuchenkova couldn’t repeat her success of 2014 at «VTB Kremlin Cup» and failed to claim the Moscow trophy again. She faced a serious opponent - world number 10 Belinda Bencic from Switzerland. The three-setter on the center court of the Ice Palace «Krylatskoe» finished with a triumph of Bencic - 3/6, 6/1, 6/1, who also managed to qualify for the WTA Finals in Shenzhen (to get a spot in it she had to beat the French Kristina Mladenovic in the semis of the Moscow competition). «I'm happy, - said Belinda smiling. – “VTB Kremlin Cup» will take a special place in my heart, because here I qualified for the WTA Finals. I’ll go to Shenzhen happy and free from any thoughts, because I’m glad to be in the Top 8».

Starting from Monday, October 21, 2019, the champion of «VTB Kremlin Cup 2019» will rise to the 7th spot in the world ranking. Pavlyuchenkova for her part promised to come back next year and be even better prepared to please everyone with her results in the future. «I was upset about the result, because losing is always unpleasant, especially in the finals. Other than that I am proud of myself and am pleased with how everything turned out this week.  From the first round there were very difficult matches. Now I’ll recover, rest and concentrate on the game to improve it», - Anastasia Pavlyuchenkova said at her press-conference after the match.

The second hope of Russians was the 22-year-old Andrey Rublev, who pulled off a compelling win over Adrian Mannario in the finals beating the French in straight sets - 6/4, 6/0 thus offering a present for all his fans and a birthday present for himself. The triumph on Moscow courts helped Rublev to climb up to the 22nd line in the ATP singles ranking. Thus for the second year in a row a Russian player pleased the local crowd with his results.

«It is inconceivable to hold a tournament like this without the support of this large organization - VTB Bank», - said Shamil Tarpishchev, chairman of «VTB Kremlin Cup» board of directors his “thank you” speech during the award ceremony. – They are our true friends and big partners, with the support of VTB we are invincible!». He also expressed special gratitude to the mayor of Moscow and the Moscow city government, to all the sponsors of the tournament - Rado, Jaguar, Emirates, Babolat, the tourism department of the Spanish Embassy in Moscow, to the organizing committee of the tournament, all its staffers and to the spectators.

In his speech Andrey Kostin, President and Chairman of the Management Board of VTB Banknoted: «Today we are celebrating the 30th anniversary tournament and, first of all, I’d like to express my thankfulness to the person who has been at the helm of the tournament from its inception up until today, it is impossible to imagine this «VTB Kremlin Cup» without him. This person is Shamil Tarpischev. Thanks to all the participants, finalists and especially to Andrey Rublev who made a big present to all of us with his brilliant victory on his birthday. And thanks to all the spectators who have coming to watch tennis during this week. More than 61 000 people came to watch our amazing tournament. We will try to make «VTB Kremlin Cup» even better next year!».

The men’s doubles title went to Marcelo Demoliner (Brazil)/Matwe Middelkoop (Netherlands) and the women’s doubles trophy was won by the Japanese Shuko Aoyama and Ena Shibahara. 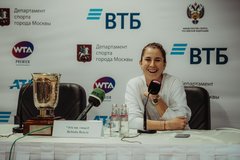